Carnival in Brazil is so important that people say that the year only really begins after the dancing and music has come to an end! As carnival usually takes place at the end of February or the beginning of March, this means that not that much gets done in the months leading up to it as everyone prepares for the festival to begin.

All of the people you see in the parades compete as part of a samba school and only the very best make it to the Sambodromo where the judging takes place. In the year leading up to carnival, the schools need to make all of the costumes by hand, build an impressive looking float and get their choreography for the endless dancing just right!

The judges look at several different categories when determining the winning samba school – a very prestigious title. They look at how good the costumes are, the theme behind the whole production, their timing and the original music that each school plays throughout the 70 minutes of the parade. Over two days the best samba schools parade and show off their skills and on the third and final day the winners dance their hearts out in an attempt to win the crown of overall best samba school.

The parades often have a political message and so you’ll sometimes see floats criticising a member of Brazil’s political elite or sending an environmental message to people watching in the sambodromo. This year for instance, the Mangueira samba school told the hidden history of Brazil which doesn’t appear in textbooks. Throughout the parade they highlighted the resistance and heroism of Brazilian Indians and African people kidnapped and enslaved in Brazil; something that kids don’t usually get taught about in school.

While the Sambodromo is the pinnacle of Rio Carnival, there are hundreds of other smaller parades going on around the city at the same time. These are called blocos and the streets throng with people dancing and enjoying the pulsating samba rhythms. While these blocos often have their own theme or costume, they are less formal than the main samba schools but are great fun as you can actually take part in them. You can usually just join one and follow it for a couple of blocks before following another brightly coloured mass of dancing people.

Everywhere you go you’ll hear music enticing you onwards and the delicious smell of barbecue from street-sellers along the way. There are loads of drinks-sellers and people selling snacks and street food to keep you fuelled up for your heavy day of partying. As there are millions of people in the streets during carnival, it can get pretty crowded and so some of the best blocos to head to are along the iconic beaches of Ipanema and Copacabana where you can enjoy the refreshing breeze from the ocean.

With so much going on, carnival really is one of the best times of the year to visit Rio de Janeiro and you’re almost guaranteed to have a great time. So put on your dancing shoes, grab a caipirinha and get ready to samba! 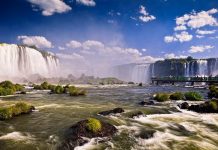 One of the Natural Wonders of the World: Foz do Iguacu

Searching for the best view of Rio de Janeiro? Look no further!